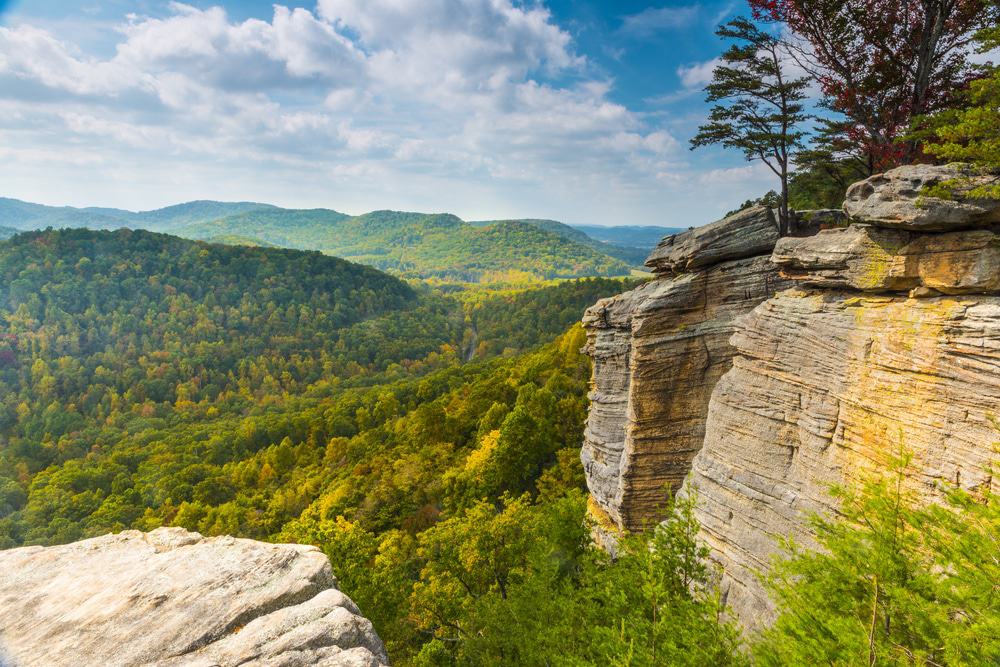 Kentucky, the Bluegrass State , offers some of the most beautiful and spectacular sights and places to visit! Just browse through these awesome pictures and be amazed by it’s beauty.

Once upon a time the Appalachians were as massive as the Rocky Mountains and the Alps, but over the years they have been slowly eroded away to their present state. Extending for almost 2,000 miles, the mountain range acts as a natural barrier between the interior lowlands of North America and the eastern coastal plain. In Kentucky itself the peaks of the Appalachians are not particularly high, but the terrain is regarded as very rugged and is for experienced hikers only. The views from the top are still awe-inspiring, regardless of the hills’ lack of height and physical stature.

Known as the Grand Canyon of the South, Breaks Interstate Park spans the border of Kentucky and Virginia. The park is famous for being home to the deepest gorge east of the Mississippi, with Virginia State Route 80 the best way to reach the area. Explorer Daniel Boone is credited with being the first to discover the beauty of Breaks Interstate Park and today there are dozens of lodges where people can stay to appreciate the sights of the area up close.

Despite being only small at eight acres, Fairmount Falls is home to an incredible 40-foot waterfall that draws visitors from many, many miles. Easily reachable within minutes from the Gene Snyder and Bardstown Road interchange, this superb Kentucky landmark is accessible by permit only to protect the natural landscape. The best time to visit is either in spring or in winter, as this is when the flow of water at Fairmount Falls is at its most impressive.

A great spot to visit for people interested in learning about the Civil War, Gallatin County is also where some of Kentucky’s most beautiful places are located. The historically important county may be the smallest in Kentucky by area, but what it lacks in size it makes up for in its own unique charm. Sparta is one of the Gallatin County communities that are well worth visiting, as this is where the Kentucky Speedway is held.

Kentucky Lake is one of the largest man-made artificial lakes in the United States, holding up to 4,008,000 acre-feet of water. But, more importantly, the sunsets over the lake are out of this world. Bass and crappie fishing are popular in Kentucky Lake and its neighbor Lake Barkley, with the land between the two lakes housing an elk and bison prairie, which is free to enter and is open all year round. Kenlake State Resort Park can also be found to the west of Kentucky Lake, with Kentucky Dam Village State Resort Park to the north.

The George Rogers Clark Memorial Bridge, which Kentucky locals call Second Street Bridge, provides a crossing over the Ohio River between Louisville and Jeffersonville. The bridge famously features in a scene from the movie Stripes, where the character played by Bill Murray gets out of a cab and throws his keys into the river. The bridge is also the centerpoint of the annual Thunder Over Louisville event, where a waterfall of fireworks lights up the sky. The bridge is named in honour of the founder of Louisville, George Rogers Clark.

The Mammoth Cave National Park is the longest known cave system in the world, with more than 400 miles of caves having been plotted to date. Keen explorers should definitely take some time to check out Mammoth Cave and its surroundings, as new caves are regularly being discovered. A United Nations World Heritage site, Mammoth Cave attracts around 400,000 tourists every year. During tours, rangers typically turn off their guiding lights, making Mammoth Cave National Park one of the few places in the world where people can experience the wonder of true darkness.

Perryville is another must-visit Kentucky location for people who are interested in Civil War history. The Battle of Perryville – which is sometimes referred to as the Battle of Chaplin Hills – is regarded as one of the Civil War’s bloodiest battles. Today, Perryville is a National Historic Landmark area and it is also listed on the National Register of Historic Places. Some of the first buildings to be built in Perryville still stand today, even though they are now close to 200 years old.

Home to Kentucky’s government, the state capitol is located in the city of Frankfort. The state capitol building houses a glorious marble staircase, making it one of the most beautiful pieces of architecture in the whole state. The staircases are without a doubt one of the main reasons to visit the state capitol, with the marble interiors having been inspired by the Opera Garnier in Paris. Guided tours of the Kentucky State Capitol are available and come highly recommended, with the First Lady Doll Collection among the most noteworthy attractions housed in the building.

The Pinnacles of Berea provide not just some of the best hiking trails in the state, but in the whole of the South. The main trail consists of a loop 6.6 miles long, which typically takes around three to four hours to complete depending on your hiking experience and fitness levels. Beautiful wild flowers are present throughout the trail, which is accessible from April until October and is open to dog-walkers too. Check out the West Pinnacle and Indian Fort Outlook for some of the best views of the stunning scenery at the Pinnacles of Berea.

Established in 1974, visiting the Big South Fork National River is a must for anyone exploring Kentucky. Hiking, horseback riding, fishing, hunting and stargazing are all popular activities at Big South Fork, which also hosts a huge collection of natural bridges that are well worth exploring and provide some fantastic opportunities for photography. Wilderness lodge Charit Creek Lodge is among the many places people can stay while visiting the Big South Fork National River.

Located within the Daniel Boone National Forest, the Red River Gorge is famous for its natural stone arches. The gorge is also designated as a national geological area due to its sandstone cliffs and unique rock formations. The Red River Gorge has developed into one of the world’s hottest rock climbing spots, with climbing enthusiasts giving the area the nickname ‘Red’. The Red River Gorge’s Sky Bridge features in the 1955 movie The Kentuckian, which starred Burt Lancaster.

Once known as Sin City due to its many casinos, Newport today is a much more family-friendly destination, with the Newport on the Levee entertainment complex one of the busiest leisure and retail sites in the whole of Kentucky. Newport is also home to one of the 20 World Peace Bells. In fact, the Newport bell was the largest swinging bell in the world between 2000 and 2006. Local places worth visiting include Newport Aquarium, music venue Thompson House, the Northern Kentucky Gambling Museum, General James Taylor Park and Newport Southbank Bridge.

Cumberland Falls is sometimes called the Niagara of the South or the Little Niagara, with the falls the main attraction of the Cumberland Falls State Resort Park. Visitors should try to time their visit to Cumberland Falls when there is a full moon and a clear sky, as this is when a gorgeous elusive lunar rainbow – also known as a moonbow – can often be spotted. The arch of white light that makes up the moonbow is an unforgettable sight and one of the most beautiful things in Kentucky.

Wolf Creek may be more famous as an Australian horror movie, but in Kentucky the name refers to a huge dam in Russell County. The area is also home to Wolf Creek National Fish Hatchery, which is free for visitors, with the Visitor/Environmental Education Center open 364 days a year. More than 100,000 people visit Wolf Creek National Fish Hatchery every year and the local area is home to some of the state’s most special scenery as well.

The Kentucky River flows all the way through the state, starting in Lee County at Beattyville before windings its slow route through the state’s mountains. The river takes in the Daniel Boone National Forest and flows through Boonesborough and Irvine before eventually linking up with the Ohio River. Perhaps the best place in the state to experience the magnificence of the Kentucky River is at the Kentucky River Palisades, between Frankfort and Clays Ferry in Madison County. This is where a series of gargantuan steep gorges as long as 100 miles long can be viewed.

Known as the Horse Capital of the World, Lexington is a must-visit for anyone travelling to Kentucky. The second largest city in Kentucky, Lexington is home to a huge array of historic sites, such as the Waveland State Historic Site and Kentucky statesman Henry Clay’s Ashland estate. But if horses are your thing, Lexington is a fantastic place to visit. The American Saddle Horse Museum and the Kentucky Horse Park are both worth checking out, while there are few places better to watch racing than at the Keeneland Race Course. The Festival of the Bluegrass also takes place in Lexington every June and hikers should head to the Raven Run Nature Sanctuary.

Bardstown was described by Rand McNally and USA Today as the Most Beautiful Small Town in America and it is hard to argue with that description. The county seat of Nelson County, Bardstown is famous around the world for its bourbon, while its eclectic shops are well worth exploring too. There are five bourbon distilleries in Bardstown, with Heaven Hill, Maker’s Mark and Jim Beam all based in the area. The Oscar Getz Museum of Whiskey History is among the top attractions Bardstown boasts, the Kentucky Railway Museum. The Civil War Museum in Bardstown is one of the biggest in the United States and tourists should also go to Wickland, a private residence that three Kentucky Governors have lived in, which offers public tours.