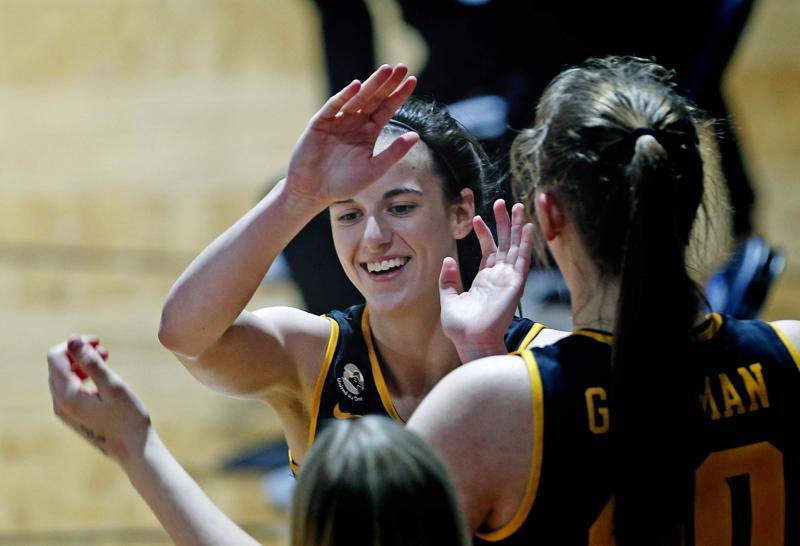 The lighting at Bill Greehey Arena was limited. The surroundings were intimate.

And Caitlin Clark loved it.

‘It seemed like a high school court,” Clark said. ‘I went up to Coach (Lisa Bluder) beforehand and said, ‘It’s a shooter’s gym.’”

Clark was bright as could be on that dimly lit court, scoring 35 points – the most by an Iowa player in an NCAA women’s basketball tournament game – and Iowa whipped 18th-ranked Kentucky, 86-72, in a second-round encounter Tuesday afternoon.

The Hawkeyes (20-9) were brilliant on both ends of the court in the first half, stunning Kentucky (18-9) with the first 11 points and sprinting their way to a jaw-dropping 49-22 margin by intermission.

A Sweet 16 matchup is set: Iowa vs. No. 1 Connecticut (26-1) in a regional semifinal to be played Saturday or Sunday.

‘I’m extremely thrilled,” Bluder said. ‘Look at this team at the beginning of the year, and we got no votes for the top 25.”

The Hawkeyes are in the Sweet 16 for the eighth time, and the second straight tournament. They made the Elite Eight in 2019, and the 2020 tournament was canceled due to COVID-19.

Kentucky’s Rhyne Howard is a first-team Associated Press All-American, and the Wildcats are a quality team from the powerful Southeastern Conference. But Clark was the best player on the court Tuesday, Iowa was the superior team, and there was no disputing either of those statements.

All five Iowa starters were in the scoring column before Kentucky dented the scoreboard.

Gabbie Marshall opened with a long two-pointer, then it was Kate Martin on a drive. Clark drilled her first 3-pointer, Monika Czinano followed, and then it was McKenna Warnock.

That early onslaught made it 11-0, and the Hawkeyes were just warming up.

‘I usually don’t notice things like that, but I did today,” Clark said. ‘When you start like that, it makes everybody play harder. You want to get stops on the defensive end.”

The Hawkeyes made 20 of 33 shots (61 percent) from the floor in the first half, the Wildcats just 8 of 37 shots (22 percent). And that’s really all that needs to be said. With 24 points (8-of-11 shooting, 6-of-8 from long range) at intermission, Clark single-handedly outscored UK.

Clark was a shooter in a shooter’s gym. The Hawkeyes’ defense was a bonus. And the result was devastating to the Wildcats.

Howard finished with 28 points for Kentucky, but 21 came in the second half, long after the outcome had been determined.

Iowa guard Caitlin Clark is congratulated as she heads to the bench late in the Hawkeyes’ 86-72 victory over Kentucky in the second round of the NCAA women’s basketball tournament Tuesday at Greehey Arena in San Antonio, Texas. (AP Photo/Ronald Cortes)