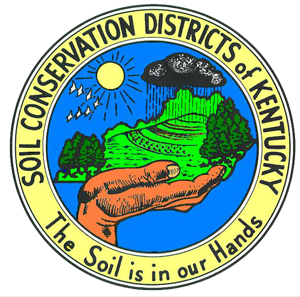 Conservation Districts provide assistance to landowners in the conservation, improvement and enhancement of Kentucky’s Natural Resources. They perform a range of conservation activities aimed at keeping the soil productive and our waterways clean and healthy.

Conservation Districts make technical and financial help available to landowners to reduce soil erosion, prevent water pollution, foster wildlife habitat, address natural resource impact from urban growth and improve the quality and productivity of farmland and forests. They serve as a middleman for coordinating and implementing conservation programs by channeling expertise from all levels of government into action at a local level.

Our services are provided at no charge to the people of Clark County. Districts are not regulatory agencies and work voluntarily with farmers to protect our natural resources. So don’t hesitate to become a partner in conservation with the Clark County Conservation District.

Conservation Districts were created by federal law in 1937 in response to the Dust Bowl of the early 1930’s. Beginning in 1932, drought conditions in the Great Plains caused widespread crop failures and exposed the soil to blowing wind. In 1933, Franklin D. Roosevelt contacted Hugh Hammond Bennett, a soil scientist and “The Father of Soil Conservation”, to awaken public concern for the problem of Soil Erosion.  Bennett informed FDR that 100 million acres of the Great Plains Region had lost some topsoil and half had been destroyed and could never be farmed again. In May of 1934, a large dust storm swept fine soil particles over Washington, D. C. and continued to spread 300 miles out into the Atlantic Ocean.

In March of 1935, dust clouds passed over Washington and darkened the sky just as Congress started hearings on the proposed soil conservation law. Bennett spoke before Congress and persuaded them to fund a permanent agency to heal the land. He requested that a local conservation district be set up in each farm community to address conservation issues unique to that area. Each district would be empowered to determine local needs and have personal contact with local landowners. Congress passed the Soil Conservation Act on April 27, 1935, creating the Soil Conservation Service (SCS). On February 27, 1937, Franklin D. Roosevelt sent a letter to all State Governors recommending enactment of soil conservation district legislation.