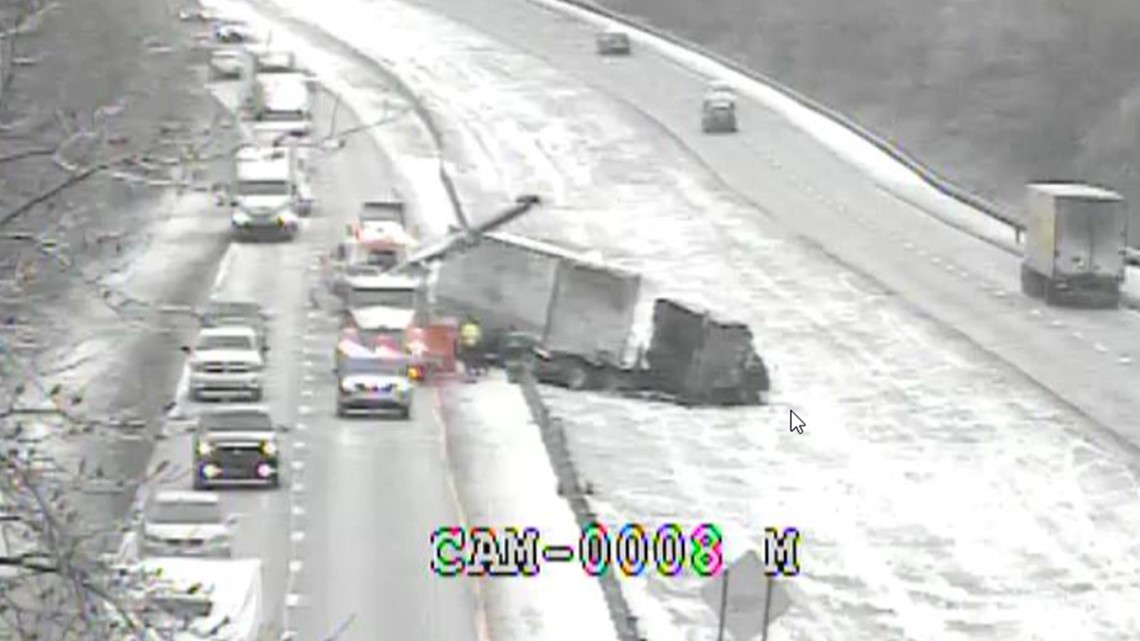 While crews cleared the interstates overnight, there are still plenty of slick spots on the roads Thursday morning.

LOUISVILLE, Ky. — Winter weather is moving through our area and it is creating some potentially hazardous road conditions Thursday morning.

I-65 North was blocked at Exit 91 in Hardin County for around an hour following a fatal crash, the Kentucky Transportation Cabinet confirmed. Investigators said the interstate is expected to be closed for up to an hour. Traffic is being rerouted through Exit 91.

Another multi-car crash in Hart County blocked I-65 South near Bonnieville at around 1 p.m. All lanes will reopen once the area has been treated with salt.

According to a release from Mayor Greg Fischer’s office, Metro Emergency Services received reports of 10 injury accidents and 32 non-injury accidents between 6.p.m. Tuesday and 9 a.m. Thursday

Fischer is advising residents to use extreme condition if they must leave their house. The office also says that 90% of roads in the Metro area remain covered in ice and snow.

Metro snow crews are working 12-hour shifts and will continue until they’ve cleared the roadways to make them as safe as possible.

MetroSafe’s latest update includes three reporter crashes. No one was injured in any of these crashes.

According to the TRIMARC map, traffic is still very slow on I-71N near Barbour Lane after a crash involving a semi. Only the right lane is open right now.

Traffic is still moving slowly on all interstates, but no other major delays have been reported.

An additional three crashes were reported between 7 and 8 a.m., bringing the total from MetroSafe to 18 crashes from 11 p.m. Wednesday night.

Louisville Fire responded to a commercial structure fire on Market Street and two more trees were reported down.

The crash on I-71N near Barbour Lane is still blocking the left lane and causing delays.

Sgt. Carey Huls with Indiana State Police in Sellersburg said there was a minor injury crash on I-65S in Clark County. Lanes are still open, but delays are possible. (9 a.m. update: Crash has cleared)

Four downed trees were reported at Red Stone Hill Rd., Applegate Lane, Bates Ave., and Judy Lane. A traffic light at Bardstown Road and I-264 was reported out and two wires were reported down on Blevins Gate Road and North Lane Road.

A multi-vehicle crash has been reported on I-71 at Barbour Lane. The left lane is blocked.

ISP Sgt. Carey Huls said I-65 is “slick and covered” in Clark County, Indiana and conditions are improving in Scott County. He said several reports of slide-offs and spin-outs have been reported.

Several reports of slide-offs and spin-outs this morning. Give yourself plenty of time. I-65 reported as slick and covered in Clark county, conditions improve in Scott County. I-64 reported as right lane clear, left lane still has some coverage. pic.twitter.com/e2VJDlg5rs

Traffic speeds are still moderately slow across the interstates.

Editor’s Note: An earlier version of this story said 44 crashes had been reported. MetroSafe accidentally sent the report for Wednesday instead of Thursday. This version has been corrected.

TRIMARC is reporting four incidents on the interstates. (All incidents have been cleared as of 7 a.m.)

There are also some reported issues at the I-64E ramp near Cannons Lane.

MetroSafe said I-64W is shut down near S. Beckley Station Road to repair a low-hanging wire. This is causing some serious delays for commuters coming from Shelby County, Frankfort and Lexington.

Slow traffic speeds are being reported along most major interstates.

The Kentucky Transportation Cabinet says it has crews out in every district Thursday morning.

According to TRIMARC, the crash on I-64W at Hurstbourne Parkway is still blocking some lanes and there is a crash on I-65N near the Watterson. No other crashes or major delays have been reported.

A crash has been reported on I-64W near Hurstbourne Parkway. According to TRIMARC, the left shoulder and two left lanes are blocked. MetroSafe said the crash involved an officer, but it’s unclear if anyone was seriously injured.

No crashes were reported to MetroSafe between 3 a.m. and 5 a.m. Two fallen trees and wires were reported and two fires – one transformer fire and one structure fire – were also reported.

Elizabethtown is under an ice storm warning and, according to Brooke Hasch, there is a thick sheet of ice in many areas. The majority of the traffic on the interstate appears to be semis and there didn’t seem to be many traffic issues. Drive times on I-65 look good other than near the Joe Prather Highway, where Hardin County dispatch said they had seen some slide-offs overnight.

Seeing mostly semis on the intestate this morning in Etown and they seem to be going at decent speeds. @WHAS11 #wakeup11 pic.twitter.com/7EsknPqZnk

In Bardstown, Ky. Meteorologist Reed Yadon said most of the issues are with ice. No major traffic issues have been reported, but nearly 2,000 people are without power.

I-64 in both directions near downtown and southern Indiana appears to be mostly clear and there isn’t much snow on the roads.

MetroSafe reported a total of 5 crashes, including one injury crash between 11 p.m. and 3 a.m. It also reported three trees had been reported down and a couple of power lines had fallen.

Interstates across Louisville have been cleared overnight, but side and neighborhood roads that haven’t been cleared could be icy and slick.

TRIMARC is reporting slow conditions across all interstates.

Snow and freezing rain have fallen across metro Louisville and areas to the south and temperatures will remain below freezing, so anything that has fallen overnight will stick.

The Kentucky Transportation Cabinet said crews have been out since overnight hours and will remain on throughout the day to monitor conditions and treat roadways.

KYTC said drivers should remember to drive slow no matter what type of vehicle they are in, especially when approaching intersections or bridges. Anyone who needs to travel should allow more time for commutes than normal.

Freezing rain and sleet caused 25 accidents on the Wednesday morning commute across Jefferson County and 20 of those reported injuries.

Make it easy to keep up-to-date with more stories like this. Download the WHAS11 News app now. For Apple or Android users.