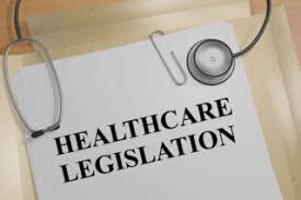 The bills now await Gov. Andy Beshear’s signature or veto, he has already signed a few into law. Legislators can pass more bills when they wrap up the 2021 legislative session March 29 and 30, but they will be subject to a veto without the opportunity for an legislative override.

Here’s a roundup of some of the health bills that have passed:

Substance-use disorder: HB 219, sponsored by Rep. Danny Bentley, R-Russell, allows pharmacies to sell hypodermic syringes and needles without a prescription. This change was made to increase access to clean supplies for people who inject drugs, which will help to decrease the risk of blood-born diseases like hepatitis C and HIV/AIDS.

HB 219 would repeal requirements for pharmacies to keep records of sales of syringes and needles and allow their sale without a prescription, with a limit of 30 of each and proof that the purchaser is 16 or older. It would require pharmacies offering syringes and needles to provide educational materials on their safe and proper disposal, and referral information for syringe exchange programs and treatment of substance-use-disorder; and to offer naloxone, which is used to reverse opioid overdoses.

The bill also allows for a specific-type of off-site pharmacy-related work that does not involve any dispensing.

Diabetes: HB 95, sponsored by Bentley, would cap the monthly out-of-pocket cost for a 30-day supply of insulin at $30 for Kentuckians covered by state-regulated health plans. The price cap would apply regardless of the amount or type of insulin the person with diabetes needs.

Health departments: HB 8, sponsored by Rep. Jim DuPlessis, R- Elizabethtown, would have quasi-governmental entities, including health departments, pay only what the Kentucky Retirement Systems needs to cover their employees’ pensions instead of using the current “percentage of pay” formula. The effect on individual health departments varies widely.

Immunizations: Senate Bill 8, sponsored by Sen. Mike Wilson, R-Bowling Green, would allow several exemptions for “any child or adult” who doesn’t want to receive a vaccine that the state mandates during an epidemic, including religious grounds, medical reasons or a “conscientiously held belief.”

Drivers’ sight: HB 439, by Rep. Kim Moser, R-Taylor Mill, would require a vision screening test be taken for renewal of a driver’s license. Drivers could be screened at the renewal office or a medical office.

Insurance: SB 55, sponsored by Sen. Stephen Meredith, R-Leitchfield, would get rid of all co-payments required by Medicaid.

SB 45, sponsored by Sen. Ralph Alvarado, R-Winchester, would limit the use of copay-accumulator programs by health plans, which prevent cost-sharing amounts paid on behalf of enrollees from counting towards their maximum out-of-pocket limits.

SB 44, sponsored by Alvarado, ensures that any insurance payments made on behalf of an individual by a nonprofit organization are counted just as if the patient made it themselves.

The Senate agreed to House changes in SB 44 that give providers until 2025 to tell women whose X-ray mammograms show dense breast tissue that such tissue is not abnormal, but slightly increases the risk for developing breast cancer. Providers are also asked to encourage “digital mammography” which provides a three-dimensional image of the breast. It also agreed to House changes that make sure the insured is responsible for payment, even if it is made by someone else, and prevent providers from paying premiums for their patients.

HB 48, sponsored by Bentley, a retired pharmacist, would allow pharmacists to be reimbursed by commercial insurance for providing medical care that other providers typically bill for, such as rapid flu tests, smoking cessation counseling or immunizations. Beshear signed the bill March 18.

Telehealth: HB140, sponsored by Rep. Deanna Frazier, R-Richmond, would permit telehealth services that were allowed to expand due to the pandemic to remain in place after it ends. A key part of the bill would continue to allow audio-only visits, which is important because the state has many places without high-speed internet and many patients who are not adept at using technology.

SB 12, sponsored by Alvarado, would prohibit a person from selling or purchasing human organs or tissue and ban for-profit entities from procuring any eye, cornea, eye tissue, or corneal tissue.

Alzheimer’s disease: SB 61, by Meredith, would require six hours of dementia-specific training and three hours of annual continuing education for home-health aides and personal-service aides who provide care for Alzheimer’s or dementia, an often frustrating line of work with a very heavy turnover.

SB 74, by Alvarado, would establish but not fund a dementia services coordinator in the Cabinet for Health and Family Services to manage the Alzheimer’s Disease and Related Disorders Council, be in charge of the state plan to address Alzheimer’s in Kentucky and apply for federal funding opportunities.

Colon cancer: SB 16, by Alvarado, addresses several issues related to the screening program, including adding “prevention” to its name and requiring the Department of Medicaid Services to compile and present annual statistics on services related to colorectal cancer.

Beshear had already signed HB 108, sponsored by Melinda Gibbons Prunty, R-Belton (Muhlenberg County) into law. It codifies existing Medicaid coverage of colorectal cancer, which includes screenings starting at age 45 for most people and genetic cancer-risk testing for the disease, to ensure uniform coverage for Medicaid patients that lines up with commercial-plan requirements.

Infants and new mothers: HB 155, sponsored by Rep. Nancy Tate, R-Brandenburg, would allow the use of a “newborn safety device” to aid the anonymous surrendering of a newborn infant at a participating hospital, police station or staffed fire station.

HB 212, sponsored by Samara Heavrin, R-Leitchfield, would require data in an annual state report on fatalities among children and new mothers to include information on demographics, race, income and geography associated with the fatalities.

Mental health: HB 50, by Moser, would make health-insurance plans comply with a 2008 federal law that requires them to treat mental-health conditions and substance-use disorders just like physical conditions and file annual reports to show how they are complying. Beshear signed this bill March 12.

HB 556, sponsored by Bentley, would allocate $20 million to a rural hospital operations and facilities loan fund created but not funded in the 2020 session. The bill has received two of the required three readings in the Senate and is in the Appropriations and Revenue Committee.

SB 51, by Alvarado, would ban the requirement of prior authorization for any prescription drug that is used in the treatment of alcoholism or opioid-use disorder and that contains methadone, buprenorphine or Naltrexone, or that is approved by the U.S. Food and Drug Administration for the mitigation of opioid withdrawal symptoms. It awaits a House floor vote.

HB 91, sponsored by Rep. Joseph Fischer, R-Fort Thomas, would add to the state constitution a statement that it does not secure or protect a right to abortion or funding of abortion. The bill has had two readings and is in the Senate Rules Committee awaiting a floor vote. If passed, it would go on the ballot for voters to consider in November 2022. Governors don’t act on constitutional amendments.

Health bills that are dead

SB 81, sponsored by Republican Caucus Chair Julie Raque Adams of Louisville, and HB 147, by Moser, would have restored local government control over use, display, sale and distribution of tobacco or vapor products. Neither was assigned to a committee, though Moser is chair of the House Health and Family Services Committee. Advocates of the bill said it had the votes to pass.

SB 78, sponsored by Adams and Sen. Paul Hornback, R-Shelbyville, would have permanently removed the required collaborative agreements for prescriptive authority of controlled substances between a physician and an advanced practice registered nurse, and upon approval of the Kentucky Board of Nursing. The bill got out of committee, but wasn’t called for a floor vote.

Rep. Jerry Miller, R-Eastwood, tried to add SB 78’s language as a floor amendment to SB 166. He ended up withdrawing it because it was deemed to not be germane, but made a floor speech about the importance of getting this legislation passed in the next legislative session.

After noting that this is the fourth year the legislation has been filed, and that he knew 70 of the 100 House members would have voted for it, Miller said, “This is a bill that’s time has come. . . . APRNs are the general practitioners of the 21st century and we need to give them greater authority.”

SB 83, sponsored by Meredith, would have let medical professionals refuse to perform procedures that violate their religious or moral beliefs. It got out of committee, but was never called up for a floor vote. Meredith filed a similar bill in the 2020 legislative session that did not pass.