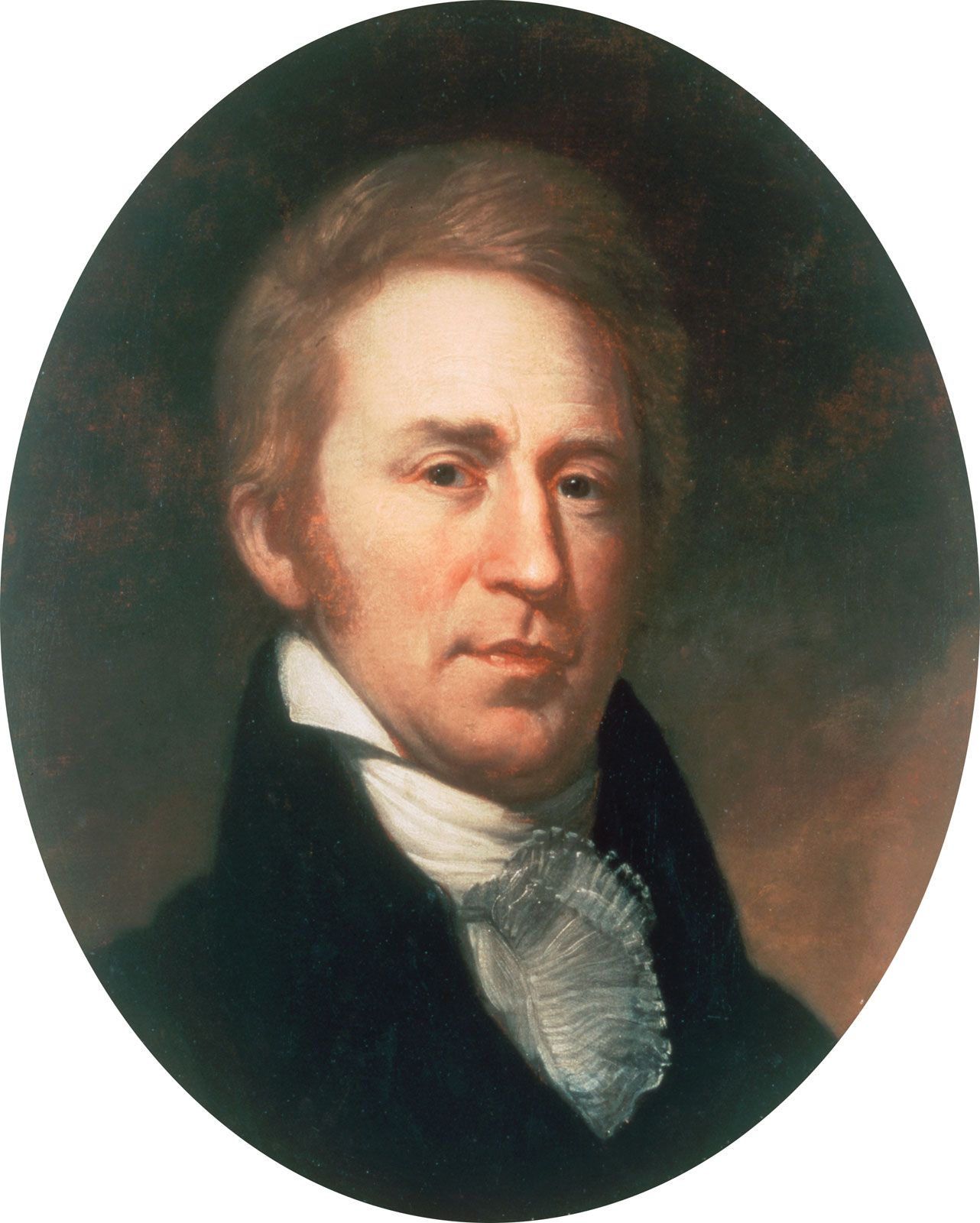 William Clark, (born August 1, 1770, Caroline county, Virginia [U.S.]—died September 1, 1838, St. Louis, Missouri), American frontiersman who won fame as an explorer by sharing with Meriwether Lewis the leadership of their epic expedition to the Pacific Northwest (1804–06). He later played an essential role in the development of the Missouri Territory and was superintendent of Indian affairs at St. Louis.

The ninth of John and Ann (Rogers) Clark’s 10 children, Clark was born on the family’s tobacco plantation in Virginia. In 1785 the family relocated to Louisville, Kentucky, lured there by tales of the Ohio Valley told by William Clark’s older brother, George Rogers Clark, one of the military heroes of the American Revolution. Like his brother, William Clark was swept up into the American Indian conflicts of the Ohio frontier, joining the militia in 1789 before enlisting in the regular army. In 1792 U.S. Pres. George Washington commissioned him a lieutenant of infantry. Under Gen. Anthony Wayne, Clark helped build and supply forts along the Ohio River and commanded the Chosen Rifle Company, which participated in the Battle of Fallen Timbers (1794).

Clark resigned his commission in 1796 and returned home to regain his health and to manage his aging parents’ estate. In 1803 he received an invitation to greatness from his friend Meriwether Lewis, to help him lead an expedition through uncharted American territory west to the Pacific Ocean. Although Lewis’s promise of equal rank for Clark was denied by the War Department, the leaders kept it secret from the other expedition members by calling each other captain. Clark’s preparations for the expedition included modifying the keelboat they were to use, engaging the participation of several Kentuckians, and drilling the men during their winter camp. The Corps of Discovery (which included Clark’s slave York) departed on May 14, 1804, with Clark operating as the expedition’s principal waterman and cartographer. His monumental maps of the West (1810–14) represented the best available until the 1840s. Moreover, he kept one of the most faithful journals on the trip, and his imaginative spelling is well known.

Map of Lewis and Clark Expedition by William Clark and Meriwether Lewis, 1804–06.

The 52-month expedition established U.S. claims to the Great Plains and Pacific Northwest. Clark gained an appreciation for the tremendous diversity of native cultures and was often more skillful than Lewis in Indian negotiations. He liked Native Americans, and they seemed to like him; the Shoshone interpreter Sacagawea and her family spent the majority of their time with Clark. He also formed a lasting friendship with the Nez Percé and may have fathered a son, Daytime Smoker, with the daughter of Chief Red Grizzly Bear.

At the conclusion of the expedition in 1806, the U.S. Congress awarded Clark double pay and 1,600 acres (650 hectares) of land for his efforts. In 1807 Pres. Thomas Jefferson appointed Clark brigadier general of militia for the Louisiana (later Missouri) Territory and a federal Indian agent for western tribes. Clark supported the “factory system,” or government trading houses, which sought to put the government rather than individuals at the forefront of trade with Indians. He also oversaw the construction of Fort Osage on the Missouri River and promoted commercial fur trade activities farther abroad, joining Manuel Lisa in the St. Louis Missouri Fur Company in 1809. During the War of 1812, Pres. James Monroe commissioned Clark territorial governor of Missouri, a position he held from 1813 to 1820. In this role Clark protected settlements and conducted the peace-seeking Treaty of Portage des Sioux in 1815. Later he supervised the removal of tribes located within the Missouri and Arkansas territories. Clark attempted to broker amicable relations between the settlers and the Indians, but Missourians viewed him as too sympathetic to Native Americans.

In Missouri’s inaugural gubernatorial election following its attainment of statehood, Alexander McNair defeated Clark. President Monroe appointed Clark superintendent of Indian affairs at St. Louis in 1822. In that capacity Clark exercised jurisdiction over existing western tribes and eastern nations being removed west of the Mississippi River. He expressed sympathy for those uprooted tribes and promoted their interests as he understood them. Nevertheless, he agreed with and implemented the policy of Indian removal, negotiating 37, or one-tenth, of all ratified treaties between American Indians and the United States. Over the course of his career, millions of acres passed from Indian to U.S. ownership by Clark’s hand.

Among his duties, Clark issued trading licenses, removed unauthorized persons from Indian country, and confiscated illegal alcohol. He extended patronage to American fur traders, artists, and explorers who, in turn, assisted him in his mission by establishing friendly relations with numerous tribes. Clark and Secretary of War Lewis Cass wrote a report that resulted in the revision of the Trade and Intercourse Acts and the reorganization of the entire Indian Bureau in 1834. Clark was also a patron of the arts, and he supported the establishment of schools, the growth of banks, and the incorporation of cities. He invested in real estate and railroads, maintained one of the first museums in the West, and promoted other economic and cultural endeavours in the St. Louis area.

Clark was a devoted family man and a valued friend. He and his wife, Julia Hancock, had five children. (He named his eldest son Meriwether Lewis.) The year after his wife’s death in 1820, Clark married Harriet Kennerly Radford, a widow with three children, and fathered two more sons. A generous man, Clark served as legal guardian for Sacagawea’s children, cared for numerous relatives, and offered assistance to religious groups, missionaries, explorers, and travelers. On the other hand, Clark treated his slave York harshly upon their return from the expedition, although he claimed to have eventually freed him. See also Lewis and Clark Expedition.