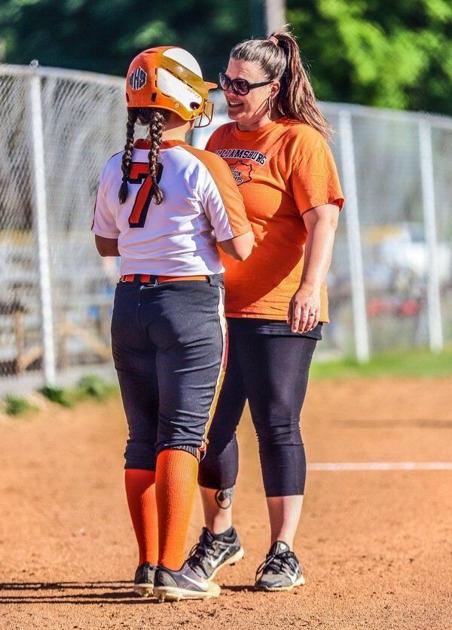 WILLIAMSBURG — It was almost an entire year before the Williamsburg Lady Yellow Jackets were able to get back on the softball field after the 2020 season was shut down due to COVID-19 restrictions, but they’ve been putting in the time since January and are ready for the start of the season in just over a week.

Coach Andrea Winchester has pulled out all the stops when it comes to preparing her team for the 2021 season. Nothing is getting in the way of the Lady Yellow Jackets ramping up for what will be their first real game on the diamond since 2019, and with that, Winchester’s team has shown a tremendous leap forward in their skills.

“The offseason didn’t really start for us until January. Once we were able to start practicing again, we hit it hard. We got on the field as much as the weather would let us,” said Winchester. “We have really been able to tweak swings and I have seen much improvement from last year, well I guess I should say two seasons ago. I have already seen the fruits of our labor. We have girls that have really transformed their swings for the better.”

The Lady Yellow Jackets will have a strong senior class leading the way in 2021. Loryn Flannery, Bethany Stephens, McKenzie Prewitt, Madison Prewitt, Morgan Prewitt, and Catilin Jones make up a large class for a school the size of Williamsburg.

Winchester said that this year’s group of seniors have shown already that they are leaders both on and off the field.

“My seniors have proven to be leaders on and off the field. They have stepped up and lead this team in the off season,” said Winchester. “They have really stepped up when it comes to working with our middle school program as well.”

Other players who will round out the lineup include Ally Wilson, Kelsi Monhollen, Brittany Anderson, Brianna Rains, Chloe Barman, and Jasmine Stephens.

Winchester’s message to her squad is team-first. She expects the Lady Yellow Jackets to perform as one, solid unit, not just a collection of individuals. She said that she expects several girls on the roster to step up and have big seasons in 2021.

“We have several girls to be on the lookout for this year. I don’t like picking out single players because to me, the team must perform solid together to be successful,” said Winchester. “(We are) looking at a few that will guide us in that direction.”

When the season begins on March 29, Williamsburg will be faced with some of the best competition in the region, and beyond. They’ll have difficult matchups within their own district, with series against Corbin, Whitley County, and South Laurel, while also taking on all the Class A schools in the 13th, including Middlesboro in the first round of the All A Classic.

Winchester said her team is not looking at the past and what they didn’t get to do in 2020, but they’re looking ahead to what they’re going to accomplish in 2021.

“I am excited to see what we can do this year. We won’t talk about the 2019 season, but I know that we are ten times the team we were then and have worked hard to get to where we are,” said Winchester. “I am proud of my girls and coaching staff for how much work they have put in. I really look forward to the season starting and getting some wins.”