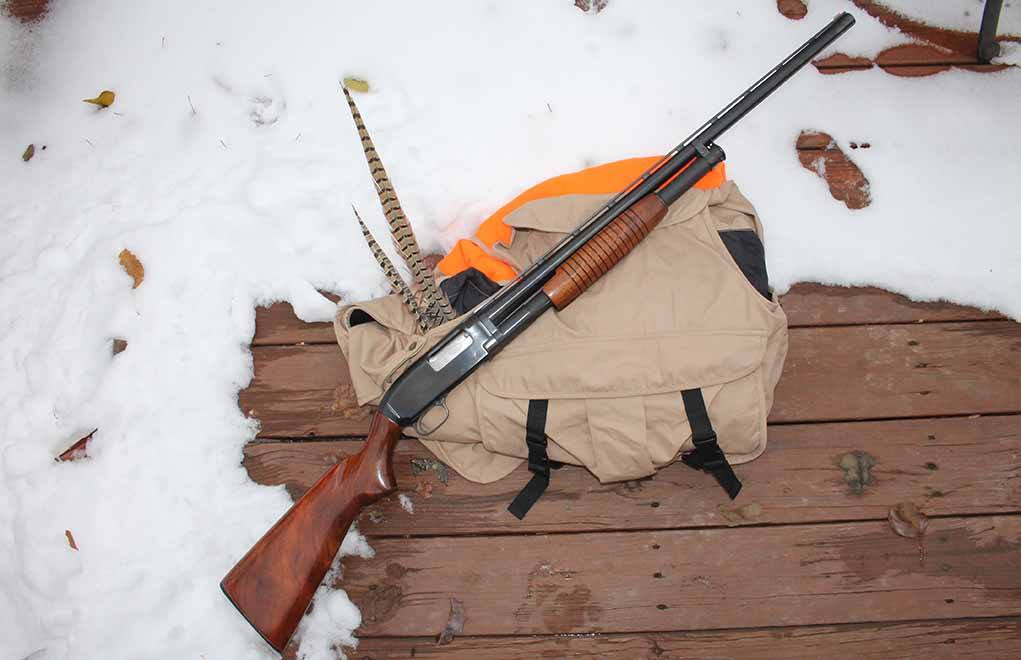 The Winchester Model 12 shotgun set the mold — and then broke it — for what a pump-action gun should be.

What Makes the Winchester Model 12 An Exceptional Pump-Action:

I will never be able to look at a Model 12 Winchester shotgun without thinking of him. Tall and lanky, he was one of those guys who seemed all disjointed and clumsy, but he wasn’t. He could walk in the mountains all day and he didn’t seem to tire. His long legs gave him a stride that was seemingly impossible to keep up with.

The internal parts of the Model 12 action were all hand-fitted and machined to precise specifications. This gave the Model 12 its reputation for a smooth action with excellent reliability, and it’s the primary reason why so many of these guns still work and see the fields today.

As a boy, I have a distinct memory of following him and I was almost always running, running to catch up. I can see him ahead of me, a Winchester Model 12 casually resting on his shoulder as he disappeared behind some big oak or tangle of brush. I guess he waited for me at times; he never left me in the woods.

I called him my “hunting uncle” because he was a friend of my father’s, but not blood kin. He was inherited from my dad and, after a few years, I was allowed to venture into the grouse and turkey woods with him even if Dad couldn’t make it that day.

It’s funny how kids see things in the world: At the time, I never questioned how he was able to spend so much time in the woods with me and a Model 12 shotgun. He didn’t seem to have a regular job, a wife and family, or any of the other things that would keep most people from going hunting whenever they wanted. I never asked him about any of this because I just wanted to go hunting. And he did, too, so we went. Things were much simpler then.

We had ruffed grouse in my part of the world back then, in numbers far exceeding what we have now. He always had good dog, either a skinny pointer or cat-footed setter with a bloodied tip on its tail — and let me tell you, they were some kind of deadly. I’m sure he missed sometimes, but I can’t remember it. If there was more than one bird on a flush or he needed a second shot, I could hear the cha-chank of the action between rounds … but it was lightning fast. He did all of this with a battle-worn Winchester Model 12 that had an action as smooth as newly churned butter. Never in my wildest dreams did I think I would ever be able to shoot like him.

He was a Model 12 man all the way, though he had other shotguns, and lots of them. He had a house full of guns, but the Model 12 Winchester was his hands-down favorite. “Finest pump gun ever made,” I can still hear him say when he would catch me handling one of his collection. This man, who was way larger than life to me as a kid, held the Winchester Model 12 as possibly the greatest shotgun ever made. Was it?

The Man From Utah And Beyond

Most discussions on the history of any iconic firearm start with John Moses Browning. At the risk of stating the obvious, Browning was a certifiable genius in firearm design whose name is linked to dozens of well-known guns — including the Colt 1911 pistol, the Browning A5 shotgun, the Winchester Model 1894 lever-action rifle and the Model 1918 Browning Automatic Rifle (BAR) — to name only a few.

Shotgun history lore holds that Winchester wanted John Browning to design a repeating shotgun, and Browning wanted to go with a pump-action model. Winchester at the time believed they needed to stay with a lever-action gun because this was their trademark, so Browning gave the world the Winchester 1887 shotgun.

The Model 1887 did OK, but it had some demons in the form of functioning issues, and Winchester relented and gave John Browning the go-ahead to work on a pump-action shotgun. Browning whipped out the Winchester Model 1893 in short order, and this gun was soon replaced by the Model 1897 (aka the Model 97): a solid, tank-like shotgun that sold for more than 60 years.

Some sources give John Browning the credit for the Winchester Model 12 shotgun, but the real daddy of the Model 12 was a fellow working for Winchester by the name of Thomas Crossley Johnson.

T.C. Johnson went to work at Winchester at the tender age of 23 and worked there almost 50 years, accumulating 125 patents on firearms — including the Model 21 double-barreled shotgun and the Model 12. Johnson took the basic idea for Browning’s 1897 pump gun and reworked it to give us the most elegant, streamlined shotgun seen up to this point. What T.C. Johnson did, in a stroke of genius differing from Browning, was to do away with that awful exposed hammer on the Winchester model.

The Model 97 had many fans and still does, but these were the ones who had learned to keep their thumb out of the way of the slide, which moves reward from the receiver to cock the gun as the action is worked. For this reason, some dubbed the Model 97 the “thumb buster,” and although most shooters only made this mistake once, T.C. Johnson knew there was a better way.

Johnson worked his magic and developed an internal hammer inside a streamlined receiver made from a single billet of forged steel. The internal parts of the action were all hand-fitted and machined to precise specifications. This gave the Winchester Model 12 its reputation for a smooth action, probably unrivaled to this day.

While the internal workings of the Model 97 were no slouch, the Model 12 action is stronger in that the bolt locks directly into the receiver. The safety is located on the front of the trigger guard where it should be because the finger of the shooter naturally rests there, not on the rear of the trigger guard. The trigger pull on a Model 12 is superior to any pump gun offered today, which is something most shooters don’t think about.

Most Model 12 shotguns produced had no trigger disconnector. This means, like its predecessor the Model 97, it could be “slam fired.” By depressing and holding the trigger a round can be fired every time the action is worked. Other than a combat situation, the actual practicality for this type of firing may be questionable, but a skilled shooter can slam fire a Model 12 faster than most auto-loading shotguns can be cycled.

When the Model 1912 made the scene in 1912 (shortened to “Model 12” in 1919), it soon became the darling of hunters, trap and skeet shooters, and shotgunners in general. Remember: Up until this point, most people were shooting double-barrel shotguns; the age of the repeating shotgun was just starting.

The Model 97 had been around awhile, but when shooters saw the graceful lines of the Model 12 compared to the homely old thumb buster ’97, it was love at first sight. The Model 12 seduced many a shooter — and it did so for the next 46 years. The Winchester salespeople dubbed it “The Perfect Repeater,” and most sportsman and shooters believed it.

Winchester engineer William Roemer designed a perfectly scaled-down version of the Model 12 for the .410 bore: It was christened the Model 42 and produced from 1933-1963 in Field, Deluxe and Skeet models. A Model 42 Winchester is a thing of beauty, and I always thought any man (or woman) shooting skeet with a Model 42 had a certain sense of style. The Model 12 man from my youth had one Model 42 he let get away from him in a trade, and I think he regretted it to the grave.

The total list of all available models and variations of the Winchester Model 12 can boggle the mind of the most ardent Model 12 aficionado. Field guns were offered in 12, 16 and 20 gauges with full, modified and improved-cylinder choked barrels. Screw-in chokes had made the scene by the late 1950s, and Winchester offered them in the “way ahead of its time” Model 59 — but that’s another story completely for another issue.

Trap and Skeet guns, Deluxe Pigeon Grades and Super Field Grades were all there to lust after. Among the variations available, Model 12s could be ordered with a Cutts Compensator or a Poly Choke; they were ugly as hell but they shot like a house on fire. Barrels on Model 12s were Winchester proof steel and made in standard blue, stainless and nickel steel. You have to figure a man carrying a Model 12 with a nickel steel barrel is not to be trifled with.

By the middle 1950s, a standard order Model 12 had an MSRP of $93.85. That was with a plain barrel and no rib; it weighed 7.5 pounds and had a very pretty American walnut stock and forearm. The Pigeon Grade VR Trap Gun model, at about the same time, sold for $260, the most expensive Model 12 in its day. Try to find one for that now.

Like the Model 97, the Ithaca Model 37 and others, the Model 12 had a long run with the military starting in World War I and extending all the way into the Vietnam era. Model 12 shotguns became known as “trench guns” and were supplied with heat shields on the barrel and bayonet lugs. Can you imagine troops in trench warfare slam-firing a Model 12? A few years later they could have been back in Kansas, pheasant hunting with the exact same gun.

The Model 12 era really ended in 1950 when Remington trotted out the Model 870 pump gun. The very things that made the Model 12 what it was — the machined, hand-fitted inner workings of the shotgun — made it too expensive to produce. This was a new age of stamped parts and lower production costs.

The Winchester Model 12 was discontinued as a production gun in 1964, and the world tilted a little on its axis that day.

Editor’s Notes: This article originally appeared in the December 2018 issue of Gun Digest the Magazine.

62 Printable MOA Targets with DOT Drills – Rifle Range in YARDS This impressive target pack from our friends at Storm Tactical contains 62 printable targets for rifle and handgun range use. Target grids and bullseye sizes are in MOA. Ideal for long-range shooting! Get Free Targets